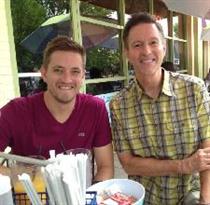 Two years ago I lost my Dad to colorectal cancer. When he died I not only lost a father, but my mentor and hero. I would give anything for the phone to ring and hear his voice say “hey Dougie…” one last time. Colon cancer is very preventable with the necessary screenings, however, once diagnosed it is extremely difficult to overcome as it is the second leading cause of all cancer deaths.

In his memory, I’m running the NYC marathon to raise funds not only for research, but also to raise awareness and support for others who are fighting for their lives. I’m doing this for my Dad, but I’m also doing this for everyone’s Dad, Mom, Brother, Sister, or Grandparent that’s been effected by this disease. If the money raised by doing this helps just one person, it’s worth it.

Short bio of my Dad:

Douglas, both physician and scientist, had a respected career of excellence in innovative research, clinical care, and education. Trained in radiology (Johns Hopkins University) and orthopaedic surgery (Harvard University), he was board certified in radiology. He was a Professor of Radiology at Emory University School of Medicine and faculty member at Georgia Institute Technology, Biomedical Engineering. Prior to joining Emory and Georgia Tech, Dr. Robertson left University of Pittsburgh Medical Center to become Founding President of Foundation Radiology Group, a subspecialized radiology practice in Pittsburgh. He held faculty appointments at the University of Pittsburgh's School of Engineering and Carnegie Mellon University School of Engineering. Dr. Robertson directed the Musculoskeletal Biomechanics & Imaging Laboratory. The laboratory developed cutting-edge clinical orthopaedic imaging including functional examination of the musculoskeletal system, computational modeling and surgical device design and testing. Formerly Associate Director of the Orthopaedic Biomechanics Laboratory, Brigham & Women's Hospital, Harvard Medical School and the Advanced Medical Imaging Laboratory, Johns Hopkins Hospital, Dr. Robertson was recipient of numerous awards and an authority on the musculoskeletal system, joint mechanics and reconstruction, and imaging. He has mentored and trained numerous undergraduate, graduate, and post-doctoral students in clinical radiology and orthopaedic research. Dr. Robertson has published numerous peer-reviewed papers and been Co-Editor of past issues of IEEE Computer and IEEE Computer Graphics and Applications. He has appeared on local and national television shows and sat on several orthopaedic and imaging company advisory boards. Dr. Robertson's record includes leading multidisciplinary teams of physicians, scientists, and engineers. The Whitaker Foundation, National Institutes of Health, and several private corporations fund his laboratory.